Masseymix for Simian Mobile Disco - It's The Beat

As an FYI, if you order the SMD album from Record Store (http://www.recordstore.co.uk/), not only do you get a signed copy of the album, some badges and a sticker, but you also get a free SMD Rarities disc ("Attack Decay Sustain Release: Limited Edition Rarities Disc" - black cardboard sleeve) with the following tracks on it:

The Masseymix is the long, 14 minute, version btw.

I think that I've now got everything SMD have released (all purchased legally)...

Lovely stuff - thoroughly recommended right from "The Mighty Atom" EP through to the re-release of "Hustler" (featuring a lovely Kevin Saunderson remix)!

Yeah I think SMD are underrated when it comes to the music they make (as opposed to their production) as they hang around with the indie crowd. Meeting one of them (James Ford? I can't remember the name of the one at Wang!) was really cool.

And for another (vague) 808 link, their mix of Bjork's 'Innocence' is easily one of the tracks of the year, IMHO!
Top

'Steve' wrote:Meeting one of them (James Ford? I can't remember the name of the one at Wang!) was really cool.

really enjoyed that mix...well nice! anymore mixes of SMD kicking about? Like Nick I have purchased most of ther stuff and they are great...nice style..like it...cheers..thanks...top!
Top

heard on radio one last night that SMD are doing a tour of UK at end jan / beg feb, no dates on their myspace page yet but def one to watch out for.
Top

Strictly speaking this is off-topic, but I'm enjoying how we've managed to keep all SMD postings in just the one topic (for a change) :

The January 2008 issue of Mixmag (issue 200) features an exclusive SMD DJ mix and is out now. The mix features SMD's Sleep Deprivation (seems to be album version). There's a nice little misprint on the sleeve for all trainspotters: Artist 'ZZT' (track 13) is incorrectly printed as 'ZTT'. 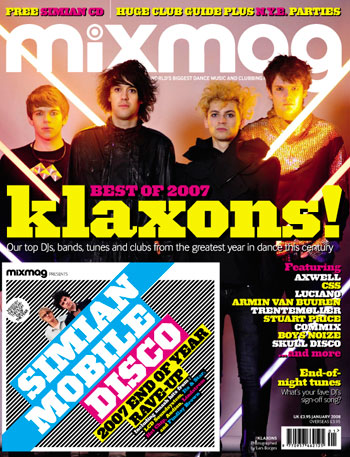