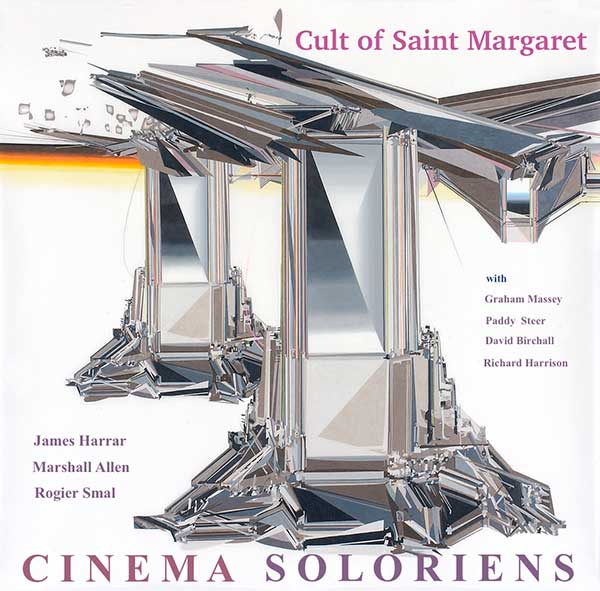 Available to purchase from:

Re: Graham appears on Cinema Soloriens - Cult Of St. Margare

This is a recording of a spontaneous jam,Here s the story behind it.I had a call from Dave Birchall who organises a lot of the free improv music scene in MCR
He has a rehearsal space in town along with Toolshed /Spacehead/Homelife drummer Richard Harrison.
They were trying to organise a gig at short notice at St Margaret's Church in Whalley Range for the U.S./Dutch visitors Cinema Solariens.
Dave could provide accommodation for Rogier Smal from Holland who Dave plays with often. But he needed to accommodate Marshall & James.
Which I was happy to do between a gig in Liverpool and one in Hebden Bridge.
Cinema Soloriens decide they will use St Margaret's to set up a recording instead of a gig.
On arrival at my house Marshall notices the instruments and asks if I would like to join them ,observing my battered and broken instrument case he dryly said
with a raised eyebrow "brother's got soul!"
,I ask if If I can bring Paddy Steer (who has played bass with 808 for many years) & Richard Harrison and with in the hour we made this spontaneous recording .
Obviously as a lifelong Sun Ra fans this was rather exciting ,http://en.wikipedia.org/wiki/Marshall_Allenwas 90 at this point but was directing the music close up and personal with intense eye contact and energy.
Afterwards we retired to the Hilary Step ,a bar around the corner where they have sunday jazz sessions ,some of that group recognised Marshall and melted .He was very courteous as usual and then we got a kebab at 1.30 AM . It was a great honour for us to be able to play with Marshall but he would nt be into all that , he was all about" can you play 3 notes ,well play the shit out of them ,Music is for your well being , you give to it ,it will always give back "
Top

Re: Graham appears on Cinema Soloriens - Cult Of St. Margare

Re: Graham appears on Cinema Soloriens - Cult Of St. Margaret