What are the State To State albums ? Think of them as B side culture, note books ,works in progress . Originally State To State 1 was released as a fan club only CD to launch 808 State’s first website in 1994 .
So if you were an 808 head back in 1994 you would perhaps be interested in some live recordings .Cubik live in Tokyo or Repa Repo live at a music tech fair at Wembley Conference Centre .
”Control “ dates back to the Quadrastate sessions and you can hear that certain ideas were recycled later down the line.
Other tracks were taken from the “Gorgeous” sessions starting at Vibe Studios in Oldham ,moving on through FON (Sheffield) and Amazon Studios (Liverpool).
Putting an album together involved a shooting ratio , some perfectly good tracks were left behind as you can hear. And this is beyond another window on the "Gorgeous" album that is 808 State Archives Volume III (available on digital platforms ,previously available as the second disc on the Deluxe version of Gorgeous) . Gorgeous and Opulent !
The sleeve for State To State is courtesy of Designers Republic ,famous for their art work for WARP records and based up the road from FON studios in Sheffield at the time. It takes a Japanese style of reading vertically and reduces the text down to micro film level .The artwork was printed on a sticker applied to a plain reverse card sleeve.
This was sent in a 7 inch mailer with a different sticker plus a flyer and some 808 State branded king sized cigarette papers, all very handsome but damaged instantly.
Not having a modem /internet connection back on 1993 ,We were unaware of an 808 State fan page started by a Mr Bennet at the Carleton University in Ottawa.
We were approached in by a second fan based site called feedback.com and it would seem that those two sites merged and became our go to internet base and the State To State release was to launch this new venture ,organised by a Mr Stewart.
Mr Stewart was very active in procuring remixes and approaching gaming companies for 808 that year. I think that site got sold off in the dot com boom a couple of years later .In 1997 a new fan based site was launched as https://www.808state.com/ and is still in operation today with Agents Arnold & King at the wheel .Its an incredible archive of 808 State discographies ,gig lists , and discussion forums .

Intro [106+State To State]/Cubik is a live recording from our 1993 world tourat “On Air “in Tokyo.
I have fond memories of that night ,Haruomi Hosono from YMO came to the concert and presented some gifts back stage,the audience were on amazing form the atmosphere charged !

Yakuza -recorded at FON -I think just after the Gorgeous sessions ,I remember I had set up a percussion rig in the live room ,and theres an improvisation that colours the track.A sultry vibe featuring a lot of Roland JD 800 ,analogue bleeps from the SH 09 -quite an YMO influence here.

20:20 (stormin' norman sax mix) [not labeled] -based on Storming Norman ,I quite like the clustered atonal saxophones .
But the world was nt ready for free jazz techno at the time .

Repa Repo (live Wembley Nov. 1992) A recording from a music technology trade fair at Wembley Conference Centre (not Stadium) We went to show off our synths -Memory Moog as Oscar to the fore some Fender Rhodes ,Darren on Congas - A full transit van that day .

Diana - Recorded at FON -Sheffield had some great musical pawn shops (pre E Bay) and quite often when popping out for lunch I might return with all kinds of musical bricabrac -This track features an aluminium necked Kramer guitar , A Vox Jaguar transistor organ , a pocket trumpet and a Deluxe Memory Man effect on practically everything and a vintage Arbiter disc echo .

Fear - If I remember correctly the voice sample is from a cassette of the teachings of St Teresa ,nice little techno breakbeat track ,1992 Vibes Studio Oldham.

King Quill- Another track from early writing sessions for Gorgeous -Features the synthetic strings and pizzicato of the ARP Quadra -303 -Its an anodyne nylon world ! I think we had a sub genre of Supermarket House at the time inspired by some of the Farley records.The title refers to a certain crew member who would nt get on an airplane unless dosed up on Niquil (Night Nurse in the UK)

Jackson Fraction - Another one from FON -Some one left a bass drum with a flabby skin -sampled that played with wooden spoons. Just noticed that the bird call sound later surfaces on the track Bird .Darren is shouting “Blow Out “ and intoning Jackson Fraction .We later found out there was a U.S kids math show with a character caller Fraction Jackson ,who knew ?

Control- recorded in Spirit Studios 1989 around the time of the Quadrastate album
TR 909 /101 /Juno 106 -Casio FZ1 , I particularly like the sound of a slapped chimney pot that lived in my back garden ,a well used floppy disc at the time.
The stutter effect is achieved by sending audio through a Drawmer Gate and triggering it via the drum machine.

At the time we used a new piece of software to compile the project called Soundtools a ltd track version which later grew up into being Pro Tools .
We were all amazed at the sight of a 500k hard drive -so much real estate !
Obviously we would prefer that you download from our Bandcamp page 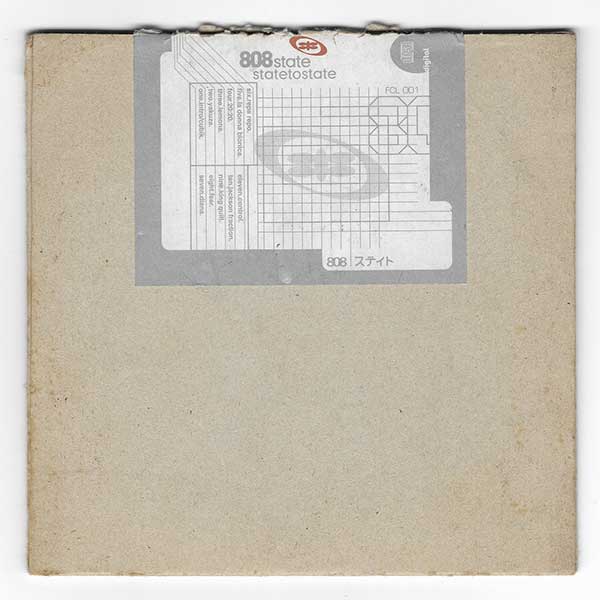 Re: State To State 1 digital

Out now as an appendix to Zang Tuum Tumb's digital editions of 808 State's extensive back catalogue, State To State Volume One:

A special exploration of deep cuts and experiments originally released as a limited edition direct 2 consumer CD back in 1994, State To State features a devastating live rendition of Cübik and a Quadrastate-era demo of Control/Contrique. Listen in:

On the two live tracks, Repa Repo was recorded live at the Capital Radio Showcase Hall of the London Music Show at Wembley Conference Centre, London on 28 November 1992. And Cübik was recorded live at a festival called On Air in Tokyo (not "on air," as in on the radio, as some websites report) on 30 July 1993.

The album was originally released via Feedback Communications, a label set up by Ian Peel and Jimmy Cauty/Black Smoke manager Keir Jens-Smith, who were on a mission in the early Nineties to elevate 808 State to a digital, connected audience. It kicked off with what would later become known as a D2C release, the State To State compilation, put together by Peel with Graham Massey via DATs sent through the post during the Gorgeous tour of the US in 1993.

State To State was conceived to illustrate and archive the embarrassment of riches and offcuts that every 808 album generated. But even this compilation generated some mythical offcuts, not least an acoustic, open-air recording of Gimme Shelter – with 10x10’s Barrington Stuart and Rachel McFarlane on vocals – that The Rolling Stones' publishers refused to sanction.

The promotion of State To State was intentionally guerrilla. Early Nineties dance music on TV revolved around The Party Zone on MTV Europe, a two-hour weekly session hosted by Simone Angel. Feedback hustled Messrs Partington, Massey and Barker to become the show's first-ever co-hosts for a special edition complete with an 808 video megamix edited together by the show's producer James Hyman and credited to The Party Zone Massive.

The special aired on the release night of State To State, on 04 August 1994, the same day that an 808 State teletext page went live, hosted on MTV Text. On Page 808, of course. There was also a social media element to the project, at least 10 years before the term become ubiquitous:

"State To State will also be available on something called internet," Eternity Magazine wrote, "a bulletin board via computer. There are 34 million users in the world and if you've got a modem on your computer, you can use this service. State To State will allow all the information 808 State want to put out to be brought up on a screen, and users can also ask questions to the band direct."

The cover was conceived by Jens-Smith, “the Howard Hughes of techno,” and executed by the Designers Republic. He described it to Record Collector at the time as "like a cross between the break-in packaging of Madonna's Sex and a computer floppy disk. And as this is a mail-order-only release, the design even incorporates space for the fan's address and postage stamps."

After State To State, Feedback and 808 State collaborated together on Foundations (a 2CD compilation for The Big Issue that also featured Radiohead, Massive Attack and Andrew Barker's Atlas project) and in the remix arena, leading to 808's work with Naomi Campbell, REM, Bomb The Bass and a still-unreleased mix of Soundgarden's Black Hole Sun.

State To State is an appendix to the Definition Series… and a very 808 State definition of Zang Tuum Tumb, the Nineties, and life itself.
Top

Re: State To State 1 digital

And Cübik was recorded live at a festival called On Air in Tokyo (not "on air," as in on the radio, as some websites report) on 30 July 1993.

Amended the State To State CD and State To State Digital discography pages to reflect the correct recording source (Shibuya On Air, Tokyo live gig) and corrected recording date of it to 30 May 1993 as confirmed by this flyer: 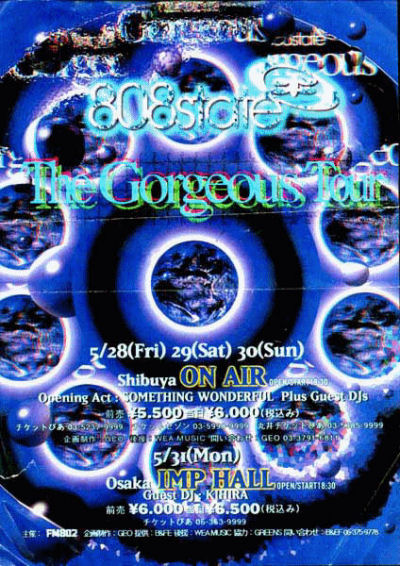