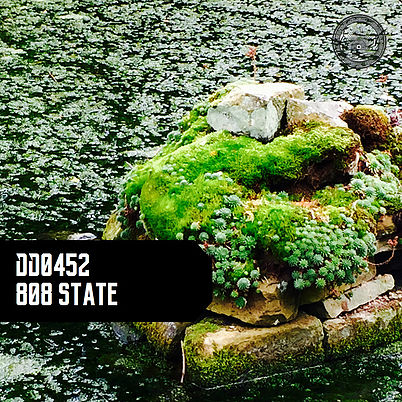 This week we welcome 808 State to the Dusk Dubs family and on selection duties is founding member Graham Massey.

"I'd like to say that this is a personal selection of formative influences not a selection by 808 State as a group, that would be complicated as we were at times a boiling cauldron of different influences, but I would say all these choices have effected the kind of albums we have made and the way we
present a unique live show over the past 30 years.

I've chosen from many possible selections and tried to keep a moodscape going whilst telling my story." [Graham]

You can find Graham HERE:

1) Tom Dissavelt - Pacific Dawn - I've picked this track from “Fantasy In Orbit” to represent a starting point in my interest in what at the time was “Space” music, growing up in the 1960’s we were heading out into the stars and ethereal atonal music caught my ear when on TV.

3) Todd Rundgren - Solar Fire - As a teenager Synthesisers were fairly new , mysterious and unobtainable, Todd represents the idea that the lone multi musician could give a more direct view of his imagination through taking control of the studio is fully represented in side two of “Initiation”.

​An epic acid drenched trip in to Ravel like oriental otherness in the form of a half hour suite. This ran parallel with a Stevie Wonder obsession along similar lines, solitary sensual synth users.

4) Miles Davis - Little Church - From the first Miles album I got hold of “Live Evil” I bought it in 77 after reading about it on the CBS inner sleeves, plus it had a great cover by Mati Klarvien.

​Nothing could prepare me for its intensity and violence then it would pause in moments of “glow in the dark” tenderness like this track featuring and write by Hermeto Pascoal. So began a journey into Miles music and his acolytes.

​5) Santana - Aspirations - Actually I think Santana albums pushed me toward Jazz ,its hard to express the importance of that group at that time in the 70 s ,My mates latched on to the post Hendrix rock vibe ,but then Santana came with the Miles /Coltrane /Sanders influenced “Caravanserai” record and an album that most people drew the line at Welcome ,I ended up with some ones rejected copy and its still one of my favourite albums today. It has little of his guitar on it but it has sunlight and oxygen for the ears.

Aspirations is off the follow up album 'Borboletta' and features Jules Broussard on soprano sax, I would say this track lead me to think of using soprano sax when we were putting Pacific together.

That voice over the bed of warm chords.

​6) Weather Report - Jungle Book - Probably my favourite Weather Report album is Mysterious Traveller, this track is like a Max Ernst painting, built from a piano improvisation in Zawinul’s house, you can hear the kids running around. They then decorate the tune with choice and unusual instrumentation as an early example of fourth world music. Zawinul was a pioneering synthesist and Wayne Shorter has got to be one of the greatest musician we still have, as a player and as a composer.

7) Rahsaan Roland Kirk - Celestial Bliss - I love the life force that is RRK, he was unlimited in invention and a greedy soul for sound and social exuberance, Please try and catch the doc on him called “The 3 Sided Dream“.

Sun Ra - Plutonian Nights - Most mind blowing gig I ever went to was Sun Ra Arkestra in Manchester in 1982, a 3 hour musical tornado that took you to everywhere in time all at once.

My music mates were all there as we all had the bargain bin Impulse albums . Looked like space music, sounded like Hollywood s Ancient Egypt. In the past few years we have organised a Sun Ra Tribute band in Manchester called The Part Time Heliocentric Cosmo Drama After School Club.

​Plus some of us were lucky to make a spontaneous album with Arkestra leader Marshall Allen in a local church when he visited in 2015.

Cinema Soloriens - Cult Of St. Margaret
​
9) Gherkin Jerks - Dyn Sync - Thought I'd better acknowledge House music in this list, and have chosen The Gherkin Jerks, Larry Heard’s more left field gamelan like experiments represents the super alien quality that made me jump in with both feet to Acid House in the late 80s, plus it fits in with the outsider quality of this play list. When 808 State first started we were attempting to respond to the Chicago sound but I think the British post punk sensibility coloured the mix affected the density and went off in a new direction.

10) Biting Tongues - Feverhouse Pt 9 - I have included my pre 808 State group Biting Tongues, because they are a huge influence on my thinking about music, I was the youngest in the group and I learnt so much from my fellow explorers.

This track is from a soundtrack album we made for Factory Records called “Feverhouse”. We were going through our tape loop primitivism phase, exploring what you could do with the new AMS digital effects in the studio, early 80s our heads full of ENO and TG and a bit of Art Ensemble of Chicago.

11) Weather Report - The Elders - A bit later on in the Weather Report timeline yet a million miles from 'Birdland' - I love these obtuse Wayne Shorter paintings, I love everything they are not.

12) Magma - Soleil D”Ork - Magma are one of my favourite groups ,most tracks are at least 20 minutes long so here is a short light one, A French group formed in the late 60s lead by their visionary drummer Cristian Vander who invented his own language to sing a saga of an Exodus to another world.

​Some say its a cross between Stravinsky, spiritual era John Coltrane and may be Otis Redding in lederhosen but mostly its all kinds of original long haul composition with disciplined passionate players.

13) John Coltrane - Welcome - There is an urgent search and arrival in John Coltrane’s later music, a nagging incessant honesty that conveys a universal consciousness. This is what makes him one of the bench marks in music and why so many musicians love him.

There are many pieces I could have used here but again to fit the feel of the mix i've chosen a small but significant one from the 'Kule Se Mama' album.

I always reach for the Coltrane when I need to drain my brain, give it a rinse and squeeze it clean.
Top
Post Reply
1 post • Page 1 of 1